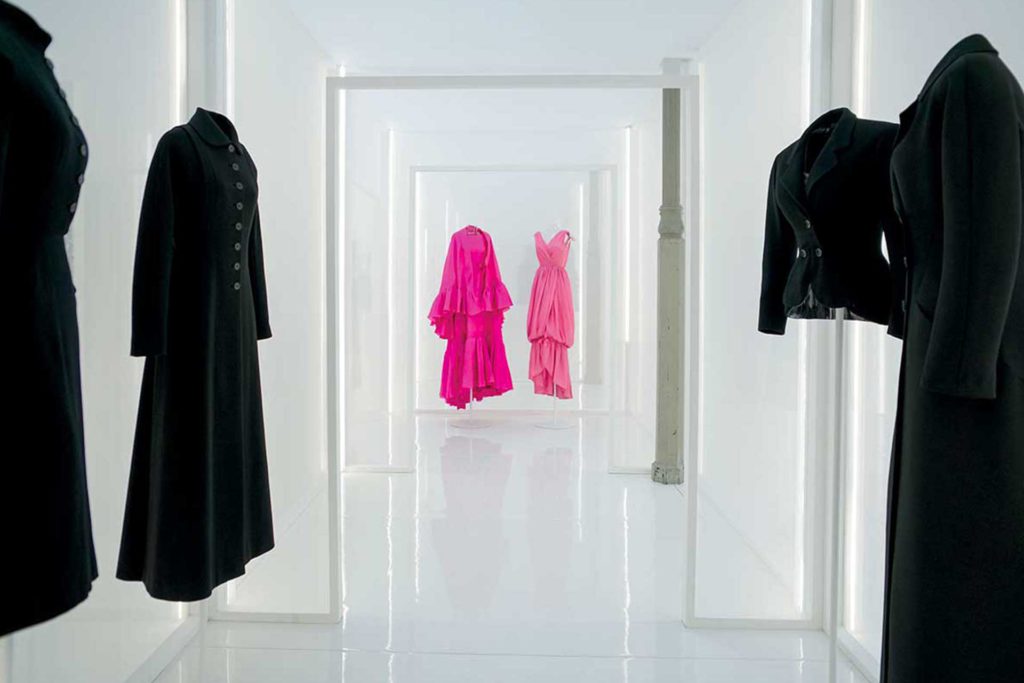 Azzedine Alaïa: heritage is a matter of future – speaking to Carla Sozzani

It was by accident. In 1968, the house of Balenciaga closed down. Alaïa, encouraged by a woman from his atelier who had a relative at Balenciaga, wanted to buy the fashion house’s unsold remainders of collections. The plan was to buy very cheap clothes and cut them up to reuse the fabrics, but then, when he saw their beauty, he couldn’t bring himself to deconstruct them. «He thought it was criminal», says Carla Sozzani, Alaïa’s close friend and frequent collaborator. «He started to collect, brought a lot home and put everything in tissue paper. His mission to protect clothes never stopped».

These days it is Ms. Sozzani who continues his mission via the Azzedine Alaïa Foundation, which she co-founded in 2007 with Alaïa and his partner Christoph von Weyhe. Her continued work to preserve his legacy is a culmination of a lifelong friendship, which started forty years ago. Back then, Alaïa was dressing private clients and running his first atelier in his modest rue de Bellechasse apartment. Though his clientele included Greta Garbo and Marie-Hélène de Rothschild, he wasn’t widely known yet. Ms. Sozzani was working for Vogue at the time; another journalist encouraged her to run a story about an ‘amazing’ under-the-radar couturier, so she went to Paris to meet him. «It happened spontaneously, click, it was immediate friendship». Afterwards, he visited her in Portofino and befriended Ms. Sozzani’s daughter Sara. Sometime in the Eighties, inspired by a burst of mischievousness, the lady and the couturier started a rumor that Sara is actually his daughter: dark curly hair was enough to keep the gossip circulating. Jest aside, Alaïa had strong paternal instincts that turned him into a father figure for young models. «All the girls were his daughters». It would not be reaching too far to give him credit for discovering and raising the first generation of supermodels. One of his protégés, Veronica Webb, once said in an interview: «Myself, Naomi, Stephanie – he taught us how to use our forks, how to walk, how to take rejection, how to present ourselves. He treated us all like flesh-and-blood children». It was Naomi Campbell in particular who bonded with the late couturier deeply: she was only sixteen when they met on her first trip to Paris. Alaïa offered to take her in – she ended up living with him for several years. In a surreal-sounding twist on the unruly teenager trope, Campbell used to sneak out the window decked out in Alaïa’s creations to go clubbing at Les Bains Douche with Grace Jones and Iman; Alaïa, woken up by the dogs barking, would come to pick her up each time like a protective father. «There was this deep love between the two of them that stayed all their lives», says Ms. Sozzani.

Just as lengthy was Alaïa’s professional relationship with Ms. Sozzani, the glue being an insatiable curiosity they both shared: «We had the same vision on women or elegance or aesthetics. I was always learning from him . He used to say that every day for him is learning something from other people in each encounter». According to Ms. Sozzani, this mindset is what set him apart from his peers in the fashion world. «If you look at his long career from 1956, when he came to France, to 1982, when he had his first success in New York… He spent many, many years learning. He was never satisfied». Alaïa’s perfectionism, dedication and a fair amount of stubbornness helped him pave his own way in fashion, making him one of the few designers who disregarded the official schedule. In 1987, a disgruntled New York Times writer even went so far as to call him ‘difficult’ for presenting his collection days after the fashion week concluded – but for Alaïa, timing was arbitrary and of secondary importance when perfection was at stake. «He was always focused on what he wanted to do. It was not a matter of seasons, not a matter of the last trend, he was Alaïa and Alaïa was the mood board. And this integrity, it’s very rare. He was not ambitious for money, but for his work. I remember he was working on a jacket for five or six years. We were saying you already achieved perfection. He said, no, I could do better». It should come as no surprise then that one of their fondest memories was Alaïa’s first solo exhibition at Palazzo Corsini in Florence in 1996. «We were working around the clock. Azzedine could have killed me, but he was just the same. He didn’t want to go home. I remember we were sleeping on the floor for three or four days, but the exhibition was beautiful».

Adrian and Alaïa: The art of tailoring

A more recent exhibition featuring Alaïa’s work showcases it next to Adrian’s. He admired the latter for his couture craftsmanship, elaborate technical constructions and imaginative use of fabric. What the two have in common is an aptitude for graceful cut and fit, which Alaïa developed while studying sculpture at the Tunis Institute of Fine Arts in his youth. Though he was looking forward to the project, The Art of Tailoring ended up being realized in 2019, a year after his passing. Another of the foundation’s undertakings was a showcase of Peter Lindbergh’s photographs and Alaïa’s clothes, an idea that came to Ms. Sozzani while talking to Benjamin Lindbergh, the photographer’s son. «I started looking at the pictures and I saw the mirror of photography and fashion. You don’t even know when one starts and the other finishes». Mutually fascinated by black, which they expressed on paper or cloth, they form a symbiosis that ultimately flatters the subject of their works – woman. From day one, the foundation’s main objective has been to preserve his work and heritage, but also the work of all the masters from his sizable collection of fashion, design and art, for the purpose of educating younger generations. The foundation started a partnership with Parsons School of Design in New York, offering internships to students. Currently in the works is a project centered around the Poiret collection. «Students can come to the foundation, look at the Poiret we have, understand the technique». The project will also result in a book created in partnership with the school, estimated to come out in May.

One of Ms. Sozzani’s distant plans for the future of the foundation is realizing Alaïa’s idea for an exhibition juxtaposing Paul Poiret and Martin Margiela. Alaïa was a fan of both creators and had a sizable collection of their works. He often talked about parallels between the two that not even Ms. Sozzani could see, despite his explanations that both Poiret and Margiela were both visionaries for reusing fabrics. Circumstances allowed, she would also organize an exhibition in Africa. «He collected African costumes and sculptures, there was a lot of that influence in his work. Even in his apartment back in 1968 there were African free-standing sculptures and pieces on the walls. He probably would be happy to have an exhibition in his country at the museum in Tunis». For now, the Azzedine Alaïa Foundation has enough on its plate. The pandemic halted the momentum of the Alaïa and Balenciaga: Sculptors of shape exhibition. The public didn’t get to enjoy viewing the creations of two legendary couturiers for very long, as the museum kept opening and closing back and forth in order to comply with the local lockdown rules. They decided to take this time for archive work, conservation and renovation of the foundation’s building to adapt it for its new role as a museum, having received the official recognition as a public utility in 2020. The exhibition is currently being moved to the Balenciaga Museum in Spain. Though erratic world events have toyed with the work of Ms. Sozzani, von Weyhe and curator Olivier Saillard, the group’s efforts have already cemented Alaïa’s legacy in the public consciousness. As Alaïa himself told the New York Times in 2013, «All can continue without me. It must continue. One day, you say, ‘That’s it’ for yourself. But not for the house».