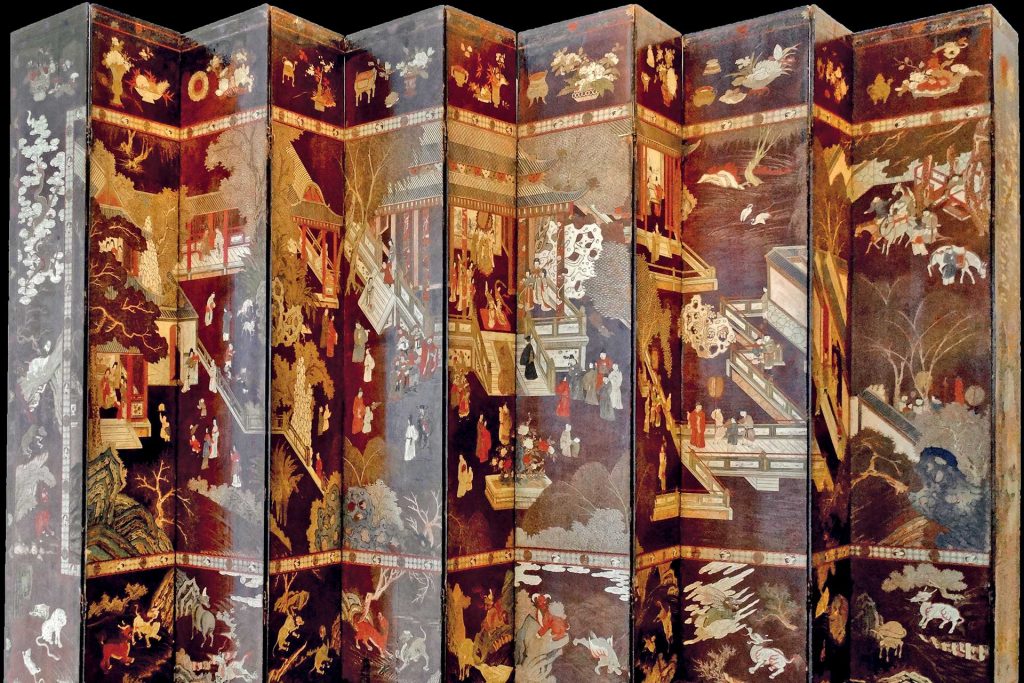 «Lacquer is my element, it is deep and all-consuming. I’ve bought thirty-two screens and have given many away, but I still have enough» – Mademoiselle Chanel and the taste to please European collectors

Paris, February 24th 2021. In her treasure chest apartment in Rue Cambon, in the hôtel particulier in Rue Faubourg SaintHonoré to which she moved in 1923, in her suite at the Ritz and her villa in Lausanne (1968) in each of her residences, Coco Chanel would brighten the walls with her Coromandel screens, composing a continuous narrative and introducing them into the boiserie with what we might consider acts of random abandon. A universe composed of differ ent shades of black lacquer, caressed by gilded details and flaunting sur faces budding with designs starring hard stones and mother of pearl, for Coco Chanel, these screens were an obsession. A kaleidoscope of flowers and boats on celestial lakes. Glimpses of Edenlike gardens, exotic birds and ethereal landscapes along the paths of dreams blossom and bloom on a background of shiny black lacquer resembling a full moon night. «Lacquer is my element, it is deep and allconsuming, it’s not something that jumps out at you. I’ve bought thirty-two screens and have given many away, but I still have enough to decorate my homes with». The Coromandel HJ collection by Chanel has fifty nine pieces, including twenty-four that are entirely unique. The motifs that were so dear to Coco feature, classed in three main themes: floral, with emphasis on the brand’s iconic symbol, the camellia, the animal theme – representing the characteristic fantastic bestiary of Coromandel and the theme of minerals – crystals and gems. Fragments of clouds and embroideries of stylized corollas, humming birds ready to take flight, bunches of wisteria and a number of more geometric and déco images mark out a trail that travels at a breezy pace, combining the secret universe of Mademoiselle Chanel and the imprinting of dynastic China with a precise contemporary mood.

Chinese Lacquers were obtained from a plant resin that was heated, filtered and purified. Several layers were then applied to wooden surfaces until a thickness of three millimetres was achieved. Sometimes it would take no less than thirty applications to complete this age-old procedure known as Kuan Kai. A stratified, opulent epic, the tesserae of a mosaic that blends legend, aesthetic and history. «When I look at this screen» – Mademoiselle would say – «in the evening, for example, I see doors opening and knights setting off on horseback». These lacquers embodied the spirit of a fairytale China, the essence of Marco Polo’s Cathay Empire. The name Coromandel is derived from Cholamandal, the eastern Indian port from which these objects were first exported starting from the reign of Louis XIV, in the second half of the 1600s, created with a flawless definition of taste to please European collectors. With Emperor Kang Xi, a stream of objects invaded the western world to meet the demand created by the rampant chinoiserie fashion. Augustus II the Strong of Saxony risked leading his state to bankruptcy due to his obsession for collecting ceramics, especially blanc de Chine pieces, which he piled up in his palaces in Dresden.

Coromandel lacquer is a type of Chinese lacquerware, mainly made for export, so called only in the West because it was shipped to European markets via the Coromandel coast of south-east India, where the Dutch East Indies Company (VOC) and its rivals from a number of European powers had bases in the 18th century. The most common type of object made in the style, both for Chinese domestic use and exports was the Coromandel screen, a large folding screen with as many as twelve leaves, coated in black lacquer with large pictures using the kuan cai (literally ‘incised colors’) technique, sometimes combined with mother of pearl inlays. In the 20th century, the famous fashion designer Coco Chanel (1883–1971) was an avid collector of Chinese folding screens, especially the Coromandel screens, and is believed to have owned 32 folding screens of which eight were housed in her apartment at 31 rue Cambon, Paris.