Ode to Wallis – You can conquer the entire world, but all victory leads to defeat

Wallis was not only Edward’s wife; she was his Boss. Mistress Wallis was raised in Baltimore by her mother, a widow at an early age who lived on handouts in a cottage described by biographer Charles Higham as architecturally unworthy of a dog kennel. As a fifteen-year-old she was already loudly proclaiming dreams of luxury, imagining gilded social circles of which she was the dazzling focal point. Poverty is fertile terrain for those who yearn for redemption. Daughter of a shotgun wedding whose father died unexpectedly, a victim of destitution and therefore destined to live an exceedingly modest life, Wallis turned from Cinderella into the splendid Duchess of Windsor.

She was a North American commoner, an international globetrotter who had never been christened and devoted her time to collecting lovers, divorces and scandals. The fact that they would never have let her wear a crown was, therefore, hardly surprising. Edward was enraptured and worshipped her, an enchanting prince who bowed before her charisma and was totally taken in by an air of femme fatale, despite her skinny masculine build. She was far from comely but her personality was very similar to that of his first great love, a sadistic nanny who used to stick her nails into his neck to make him cry. Edward was a hesitant, polite, fragile man of habit and hygiene, with a penchant for elegance. A man who loved to do petit point embroidery in his dressing-gown, and whose latent homosexuality, inclination to masochism and low virility were the subject of gossip in a restricted circle of acquaintances.

Leaving aside the elegance she adopted as make-up that lent beauty to her otherwise forgettable features, Wallis was the exact opposite of Edward. Resolute, authoritarian, and not averse to excess, she was a social climber and perhaps also a nymphomaniac, who definitely excelled in a great many erotic practices acquired in the Chinese brothels she frequented with her first husband. Earl Winfield Spencer was an officer in the American air force known to be a degenerate alcoholic and she joined him when he served as commander of the USS Pampanga in the Far East. While there,Wallis is said to have dedicated her time unreservedly to prostitution, gambling, lesbian relationships, sadomasochistic practices, pornography, and drug trafficking. There was no fragility in Wallis, instead she was filled by a powerful desire to reach the very peak of her brilliant existence.

Her biographers paint many contrasting pictures of her: a commendable, victorious, loving woman or a cunning, fearsome, bewitching expert in sexual magic. Different stories also exist about Edward, described as both a charismatic king, the best-loved and most admired even in all of British history and as a weak monarch, unsuited to his role as sovereign and a good candidate for abdication. The truth is not a simple matter. One thing we know for sure is that Wallis went to China not out of love for her first husband, as she was already betraying him to avenge herself for the humble existence he forced her to live, but on the request of the naval headquarters. The latter wanted her as a courier for the ministry, and in this way gave her the chance to experiment new affairs. When Spencer left her in China because he had fallen for a young male painter, Wallis found herself alone and linked to the American secret service. By no means distressed, she saw this as an invitation to devote even more time to her intoxicating style of life.

Besides which, Spencer had been a mistake in her life. She had been convinced that their marriage would have landed her in the golden circle of Baltimore society only to find herself doing her own dressmaking at home in the company of a snobbish, perverse husband who was quick to violence, from whom however she must have learnt her inclination to any form of immorality, which became her biggest weapon, her absolute power. Darkness in a soul can turn into a blinding flame: Wallis managed to make hers shine magnificently. There was nothing dark about her. An abortion in a squalid Chinese clinic had left her sterile and with permanently damaged health. She got through life’s abysses by illuminating them, turning them into passages en route to her attainment of a glory pursued without fear.

Once trained in the art of profitable conquest, after Spencer she made no more errors. Back in the United States and recently divorced, she chose Ernest Aldrich Simpson, a wealthy company director, as her next husband. Dull and far from exciting, he did however provide access to the London high society that Wallis so yearned for. It was precisely thanks to him that she met her future slave, namely Edward Prince of Wales. Thirty years old, with a pageboy’s shock of blond hair, shy before her cold, strategically standoffishness, he was immediately bowled over and ready to grovel rather than lose her. Embarrassing episodes are told of him worshipping her as if she were a goddess who had appeared out of the blue, and of her snubbing him with the air of an unattainable being. An able connoisseur of seduction techniques, she soon had him on the end of a lead, her happy puppy. Simpson immediately stepped aside, not even attempting to hold onto a wife whose spending habits were draining his finances.

The greatest story of submission in history started: the tale of a king who dreamed of becoming a servant and a servant who dreamed of becoming queen. All the gossip of that time had Edward making himself bearable to Wallis with gifts of jewelry, crowning her and placating her. When he became king on the death of George V, Wallis rejoiced, hoping in a throne of her own, but in order to marry her, Edward had to give up his own, all his titles and his very country. None of the royal family attended their wedding in France, neither did any member of the government. All they received was a letter from Edward’s brother, informing them that he had prohibited Wallis from receiving the royal treatment she was actually entitled to.

Wallis was furious and desperate for revenge. On 22 October 1937, she decided to meet Adolf Hitler, a dear friend of one of her ex-lovers, Ribbentrop, a Nazi-Fascist party official. Due to his obedience and dedication to Wallis, mild Edward therefore found himself before a Führer seeking alliance with England against Russia, who promised that victory in the war would have led to the exile of the royal family, given him back his throne and seen Wallis finally become queen. None of this came about. For Mr. and Mrs. Windsor the end of the war marked the start of travels, socializing, and drinking. Hundreds of suitcases followed them around the globe from one party to another, Cecil Beaton’s photos showed the excesses of their fine living, but Wallis had lost her dream, had no more heights to scale, she was at the top of what remained with only a precipice before her.

She no longer had the anchorage of social climbing to steady her, she swayed, holding onto insane equilibrium by drinking vodka from silver tankards, she didn’t eat, was accustomed to not doing so. Wallis Simpson had always sustained that you could never be too rich or too thin and she finally became anorexic. A former hygiene freak, Edward gave himself up to excess, following every step taken by Wallis, swaying drunkenly with her on their way out of night clubs. Immortalized by the photographers’ flashes, their elegance grotesque in their drunkenness, they held on tight to each other until 28 May 1972 when they were separated forever. Edward died of cancer and all that remained to Wallis were the jewels and an intolerable solitude. Gradually she disappeared, a recluse in her home on the edge of the Bois de Boulogne, burying herself, slowly wasting away and becoming seriously ill.

Her life then had its umpteenth about-face, when she ended up powerless under the control of a certain Suzanne Blum. Despite being over eighty years old, this famous, terrible lawyer and schizophrenic Mephistophelian being had gained power of attorney for the duchess and, with it, total control not only of all her assets but of what remained of her life. Blum allowed nobody to come near Wallis, or even listen to her voice. The duchess mean- while had become a bedridden skeleton, hooked up to various machines, with a feeding tube up her nose and, although still breathing, had been dead for years – this goddess who had challenged, dominated and won everything. You can conquer the world, but it changes nothing, all victory leads to defeat. Imprisoned in a room like Joan Crawford in the film Whatever happened to Baby Jane? Suzanne Blum was her Bette Davis, lovingly and madly commenting over the duchess’ dead body: «The Duchess’ face still looks so beautiful and young. The beauty of her soul is shining through».

Charlotte Abramow is a Belgian photographer and filmmaker whose work combines seriousness and absurdity. She began taking pictures of her friends at the age of 7, and became passionate about image-making at the age of 13. By 16, she was an intern at the Recontres D’arles, where she met Paolo Reversi, who later wrote an article about her images for Polka Magazine in 2011: The Fragility and the Soul of a Warrior

Wallis, Duchess of Windsor (born Bessie Wallis Warfield; 19 June 1896  – 24 April 1986), known as Wallis Simpson, was an American socialite and wife of the Duke of Windsor, the former British king Edward VIII. Their intention to marry and her status as a divorcée caused a constitutional crisis that led to Edward’s abdication. 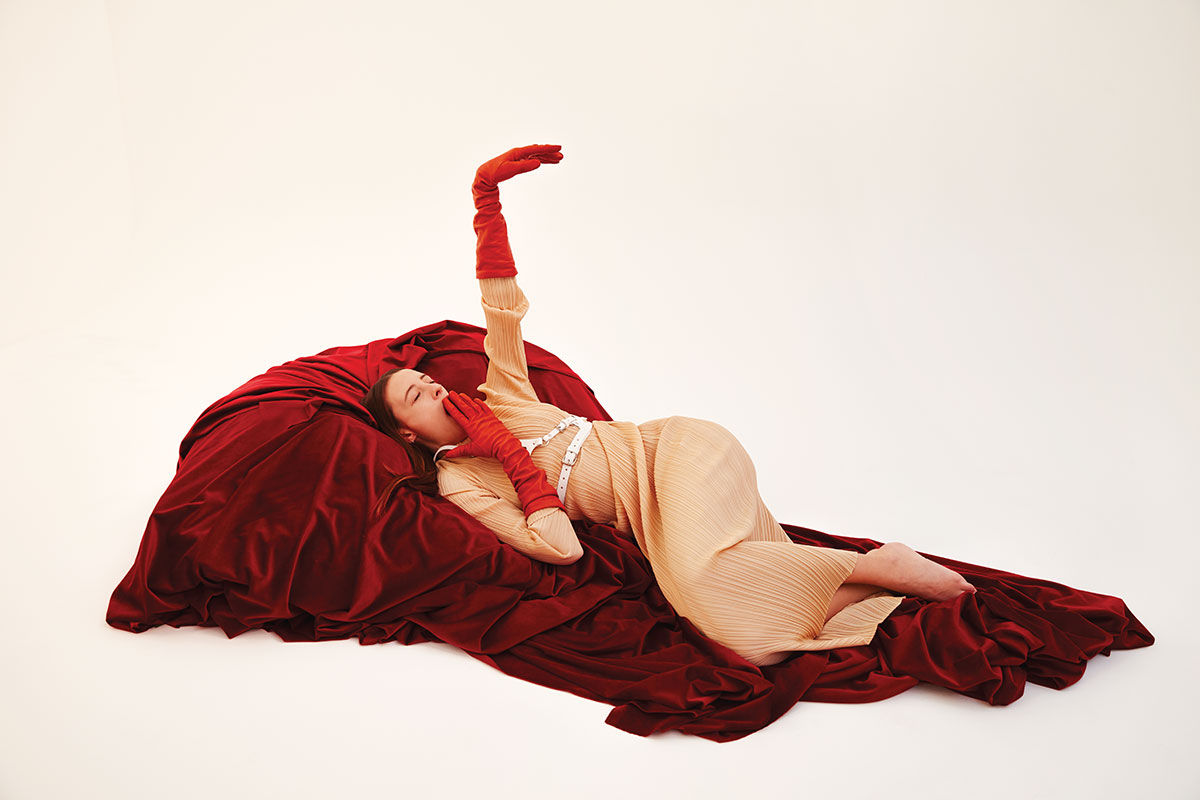