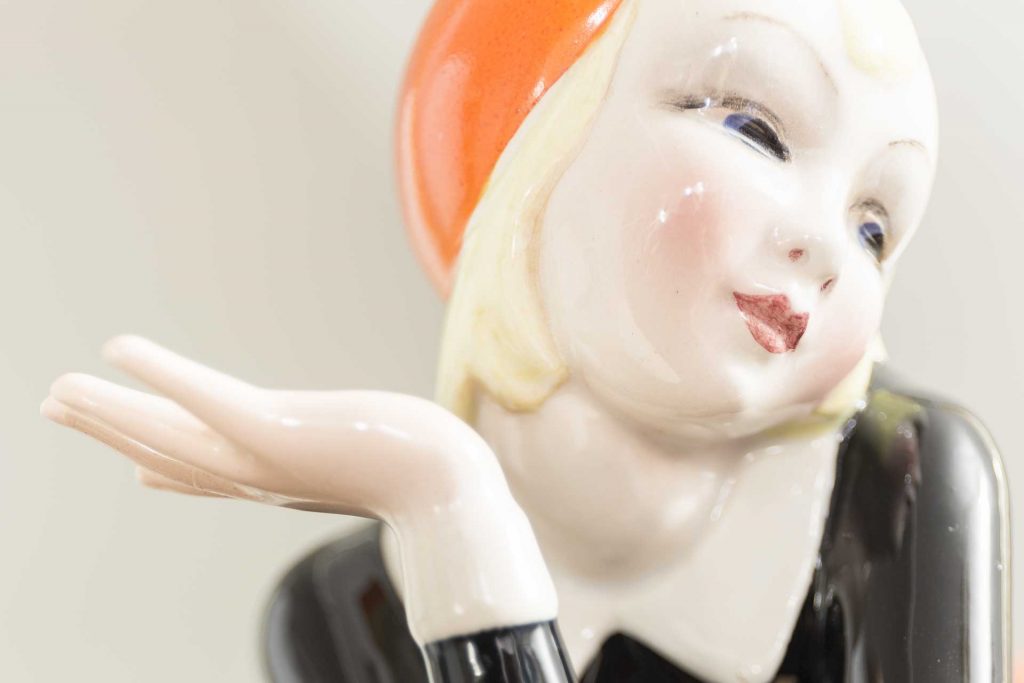 The protagonist of our story is Helen König — affectionately nicknamed Lenci by her circle of friends. Austro-German origin, she was born in Turin in February 1886. Her family had moved from Germany the year before after her father had been appointed the head of the Royal Agricultural Station — but his premature death left his wife and children in a difficult economic situation. Helen grew up with an eclectic spirit and an inclination towards art. She traveled throughout all of Europe studying different subjects and taking on various professions, eventually graduating from Düsselfdorf with a degree in teaching photography. Upon the outbreak of World War I, Helen returned to Italy where she married Enrico Scavini in 1915. Three years later, she began a working partnership with the artist Sandro Vacchetti. Together, they founded Lenci and created their famous dolls, first made out of cloth and later ceramics, based on the ones that Helen Köning Scavini had fashioned out of rags after the death of her firstborn. In April 1919, they established Ars Lenci, a Lenci manufacturing branch for the production of felt toys and dolls in Turin.

The origin of the name Lenci remains controversial. Some say that it comes from Helen König’s childhood nickname, while others insist that Lenci is an acronym of the motto Ludus Est Nobis Costanter Industria or Play Is Our Constant Work. In a short time in the 1920s, the Turin-based brand became popular worldwide in with their toys, dolls, puppets, accessories, clothing, pillowcases, shawls, hats, curtains, wooden furniture, slippers — in short, all of their products, whether in fashion, fantasy, or furnishing. Lenci created an entire world all covered in the ubiquitous thin felt called pannolenci (literally ‘Lencicloth’) made specifically for the brand which, rendered in a range of colors and shapes, could be used across almost anything imaginable. In 1925, Lenci participated in the International Exhibition of Decorative and Industrial Arts in Paris. Their stand was constructed as a children’s environment presenting a children’s room and a children’s theatre with handcrafted architectural elements that underlined the various aspects and morphologies of the dolls. The stand, created by painter Gigi (Luigi) Chessa, won three Grand Prix, six gold medals, three silver medals, and seven certificate awards, sealing Lenci’s place in history.

Many artists of the time gathered around Lenci, including Marcello Dudovich, Felice Vellan, Teonesto Deabate, Giuseppe Porcheddu, Giovanni Riva and, of course, Sandro Vacchetti, who was Lenci’s artistic director until 1934. Lenci’s success was marked by their constant search for creativity and balance: experiments in technology during the 1920s allowed for the later developments in quality in both the industrial and decorative fields. In 1928, the company started to incorporate ceramics into their production. Lenci design was inspired, in part, by Danish and German culture, specifically the Wiener Werkstätte design movement and their treatment of colors and glazes. Lenci’s peculiarity lay in the fact that the company allowed all the collaborating artists a freedom of expression, without limiting their designs with considerations of commerce and practicality — an unprecedented phenomenon in Italy at the time which spurred consumers to see Lenci products as collectibles. Lenci achieved what they set out to do: to create an array of ceramic products aimed at those belonging to the upper middle class with a modern, cosmopolitan taste, interested in acquiring icons of modernity with an international imprint.

In January 1929, Gio Ponti praised the originality of Lenci ceramics in the pages of Domus. Another review of Lenci products in a London exhibition, published by the British periodical The Studio, led to the announcement that the Metropolitan Museum of Art in New York had purchased Lenci items to add to their collection. In December 1929, Pesaro Gallery in Milan displayed ninety-five Lenci pieces across three rooms of the Palazzo Poldi-Pezzoli accompanied by a presentation on Lenci by critic and journalist Ugo Ojetti. The works featured in the exhibition were by the aforementioned Chessa, as well as Vacchetti, Deabate, Porcheddu, Riva, and of course, Helen Köning Scavini herself. The show also included Giovanni Grande, who presented his piece Idillio Veneziano, and painters Giulio da Milano and Massimo Quaglino, Felice Tosalli and his animalier, Mario Sturani with Il Pupazzo e Capotreno, and Lino Berzoini, whose ceramic works were molded in the same vein as Italian sculptor Adolfo Wildt. Established artists were there too including Clelia Bertetti, Clelia Formica, and Bona Sancipriano of Bavaria of Savoy. The choice to exhibit the works in a fine arts setting was a deliberate one; a play between the roles of decorative arts and figurative arts. Collectively, their creations corresponded to the prevailing taste of the middle class and ensured the widespread business of Lenci. Testament to the company’s size were the high numbers of Lenci figurines sold, ranging from dolls to Virgin Mary statuettes. Lenci ceramics encountered a certain spirit in Turin and rose to become an icon of the city. In the landscape of ceramic production after the first World War and particularly among the intersection of decorative arts and crafts, Lenci’s products stood out. They offered a wide array of themes, from classical mythology and naturalistic animals to scenes of everyday life to contemporary sculpture after innovations in plastic. It was no coincidence that competing manufacturers began to spring up around Turin shortly after 1930, who were actually only imitators of Lenci.

The Scavini couple adopted an original mixture for the production of their ceramics, combining clay found in the local region of Piedmont together with clay from Holland, which was more elastic and fire-resistant. The company’s historic works are signed and dated on the bottom, along with an engraving of the name of its maker and the company’s signature doll-shaped insignia. All the decoration was done with a layer of underglaze and brushwork, with a final coat of glazing fired at high temperature. In 1933, things started to change. The Garella brothers joined the company taking on a more commercial and less artistic vision of the Lenci dolls. The time of the collectible Signorine dolls was over.

Gio Ponti once famously asserted that industry is the style of the twentieth century. In the world of porcelain and majolica design, at least, this combination of art and industry was evident — especially notable in the designs produced by Richard Ginori. Ponti served as its artistic director at Richard Ginori from the end of 1922 until 1930, revolutionizing the factory’s collection of samples in just a few years with modern shapes and colors. This was during the height of Italian Deco — interpreted with an eye towards romance and refinement — of which Lenci, too, was a part. Under the artistic direction of Sandro Vacchetti, Lenci enjoyed their best season; although Vacchetti garnered plenty of fame from his ceramic creations, the famous Signorine (or Misses), the driving force was the neverending imagination and depth of research behind the creation of each of his figurines. Since the first ceramic doll in 1928, the true creator and guardian of Lenci’s icons had been Sandro Vacchetti whose ideas provided the source of many ideas and directions for many other producers of Italian ceramics. There are scores of documents that attest to the significance of his role within the company and the dominance of his ideas and decisions within it.

In 1934, Sandro Vacchetti went on to found Essevi, for which he created La Signorina Grandi Firme (The Designer Miss), drawing his inspiration for the figurine directly from the graphic posters of Boccasile. This transformation from 2D graphic design to 3D ceramic sculpture later proved to be one of the most important and ingenious decisions of the company; today, La Signorina Grandi Firme is recognized and admired all over the world and still remains the ceramic symbol of femininity. It was clear that each characteristic invented by Lenci represented an innovation in decorative arts in Italy as a whole. Though Lenci began as a project for Helen Köning Scavini, it was enriched by Sandro Vacchetti’s modern touch that brought graphic design, theatre, and fashion to the products. As a man of cinema, Vacchetti nodded and winked at audiences with such cornerstones of Lenci design like Le due Tigri (The Two Tigers), Nudo su foglie (Nude Among Leaves), or Nudo con il fauno (Nude with Faun), which were a bit explicit and a bit naughty — but nevertheless sure to bring widespread public acclaim and success, punctual as clockwork. The entrepreneurial spirit of Lenci caught the attention of commercial industries and was developed throughout a network of shops, advertising campaigns in all the major magazines of the era, and catalogs that showcased the varied repertoire offered by the ceramic company.

The trademark ‘Ars Lenci’ was registered in Turin on April 23, 1919, a symbolic date that temporally defines an activity started some time before by Helen Konig, wife of the owner Enrico Scavini. Helen started making rag dolls as a therapeutic activity after the premature loss of her daughter. Scavini turned this pastime into a real business, devising a system to steam press the felt flaps, used by Helen to create the dolls, into metal molds. Also the origin of the term Lenci is due to Scavini’s wife, from the play on words of Helen’s diminutive (affectionately called Elenchen by her father and mispronounced by her as a child in ‘Lenci’).