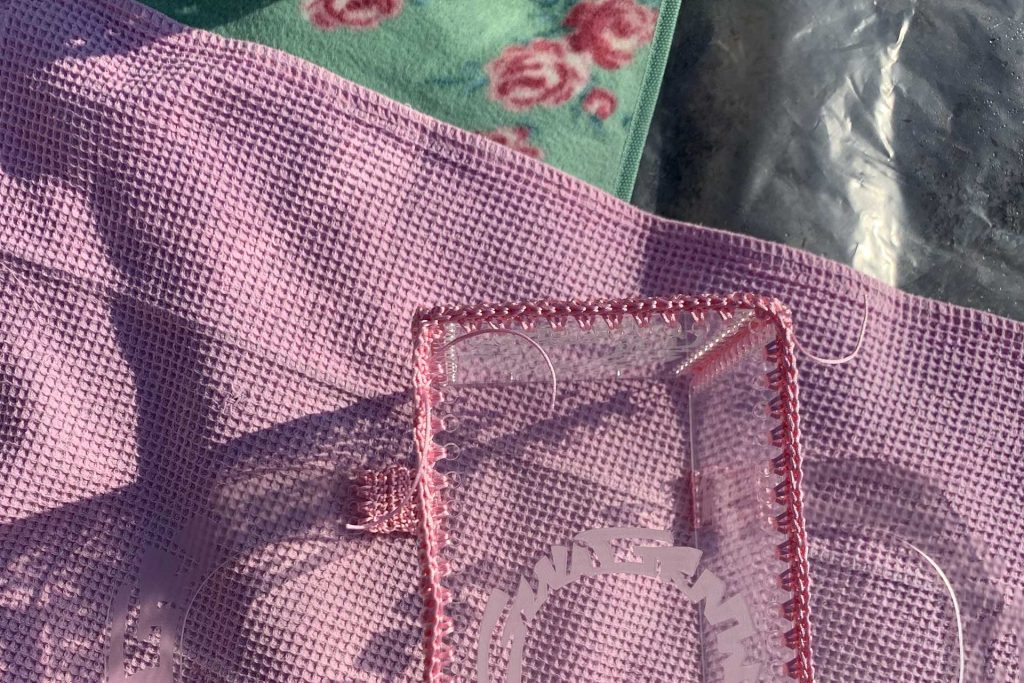 The spartanism of the tech world and the femininity of craftwork

A search for elements during the pandemic lockdown became a journey to upcycle by-products discovered in a factory. In conversation with Gina Grünwald

Even though knitwear is predominant: it is the material from the waste of industries that comprises the mass of her intrigue. At the heart of this exploration was a commitment to nature and activism for the zero-waste resolution. Says Grünwald, «I’m an activist. Art is how I bring change. It’s a duty of our time as young designers, to create a social zero-waste business». Grünwald assesses erstwhile practices of materials and processes, to challenge and translate them onto a narrative that lends value to recycling in the context of today.

The designer’s process of creativity is augmented by her lifestyle of veganism and pro-environment instincts which were sharpened as a child living close to natural surroundings. An Italian lineage, early years spent in different parts of Switzerland, travel, cycling, and being a sportswoman have shaped Grünwald’s penchant for bringing influences of diversity together. «I enjoy colliding the old with the new. In terms of materials and techniques used, I invest time learning new cutting-edge technology». As life paused due to the pandemic, Grünwald embarked on a quest to regenerate from discard, handcrafting multifunctional merchandise from 100% locally sourced Plexiglas offcuts that would have ended as pollutants in the future. Using her knowledge of traditional crochet and knitwear, she reforms by-products to create objects of attention and discourse – handbags and accessories with the individuality of her brand. Her craftswomanship, as she coins the term, is a synthesis of 3D printing, laser cutting and engraving, and crocheting biodegradable filaments to weave the piece as a whole. The Plex Bag collection pieces are not replicated – each one is a Swiss studio creation – and are conceptualized with multiple layers of functionality for the user, aiming to redefine the predominance of leather in the handbag industry. Grünwald’s project found roots as a burgeoning brand carrying a responsibility towards non-profit donations for charities and NGOs with every sale. The ethos of her brand GINA GRNW is «a social enterprise with a strong zero-waste and upcycling DNA». The brand’s mission statement – «At GINA GRNW we are doing things differently. As a social business, it aims to battle the global social and environmental crises by one sale at a time» – is a reflection of Grünwald’s belief system.

Since she was a young adult, Grünwald felt certainty around creating an impact on society along with building a business model that would serve as a unified goal of contribution. After grammar school, she fulfilled an aspiration of working as a bike courier that led to meeting people from all walks of life. It was the starting point of an individualism which evolved with her pushing barriers of male dominance, as a professional in a group of men with a scarcity of female bikers. The artist discovered the idea of social business by way of which she could trigger a change in the planet ecosystem and animal-related matters, delivering profit through the sale of her merchandise and converting part of it for donation. Later, as a student who was in lockdown in her hometown, this vision translated into GINA GRNW, «a profitable social business. Young designers are needed to break the cycle of the exploitative systems». She encourages fellow designers to procure recyclable elements in nearby vicinities and does not attribute the uniqueness of a product to the rarity of its origin. Her practice of design and production lays a foundation of renewal with the reduction of ill-effects on the resources of nature. Its implication benefits a gamut of factors including minimizing travel and fuel consumption for procurement, thereby reinventing products with components that bolster the eco-footprint.

As an apparel stylist, her focus is on the deconstruction of forms employing fabric yards in their state of origin while minimizing patternmaking and cutting that expend waste. As an activist, she cherishes a commitment to design and manufacture that contributes to the ethics of renewability. From the supplier and studio to the sale of each of her creations, Grünwald builds on an ethos of collaboration where she is a part of the composite wheel of transformation. The artist has conjugated with creatives akin to her philosophy, who translate her design language onto visual communication and marketing. «I cannot change the cycle of capitalism in my work lifetime, but I can begin by being a part of the conversation that brings a difference. I want to be able to give back and make a change». Grünwald has launched her products as an alternative platform where the thrust is on the dialogue of sustainability apart from utility, saleability, and charity.

Grünwald’s interpretation of textiles is «joining pieces to make a unit and then replicating the units». As a bike courier, she delivered boxes that constituted an impression of structure on her. The construct of a box and the shapes of its elements have become the blueprint for the patterns of her garment collective. She was also influenced by the uniform as a deliverer, quoting the colors and their vividity as a reflection on her art stylization. She picks fabric segments and treats them as patterns to assemble the prototype, lending an appeal of geometry to the end-product with an emphasis on the nascence of form and shape. She is motivated by programming techniques of which she pushes the boundary in terms of learning and expertise while modeling each of her collections. «I speak five languages and consider fashion to be my sixth language».

Gina Grünwald is a second-year student of BA Hons in Fashion Design at Central Saint Martins, London. Growing up in both urban Zurich and the Swiss country landscapes, she could identify with diverse experiences which, in her mind, struck with each other to create a tension force that propelled her creative process. Her narrative is shaped by a potential where she introduces herself as a changemaker in the world of garment and accessory design. She practices a confluence of hi-tech and modern craftswomanship, adding teamwork, moral code, respect, and collaboration to the vocabulary of sustainability. She creates solutions and choices in her products, adding the advantage of ornament and embellishment in detail. By combining the technology of the times with textile craft and upcycling with practicality, Grünwald contributes to humanity through the sale of her creations. Visibility and transparency of the process of product creation give consumers insights on how they can participate in preserving the environment. «It is our responsibility to educate the masses on social and environmental issues within the couture industry and beyond».

GINA GRNW is a brand and social enterprise project created by Gina Grünwald, a fashion design student at Central Saint Martins. The brand presents itself as an alternative platform with a strong zero waste and upcycling dna, challenging the destructive mainstream world of fast fashion.