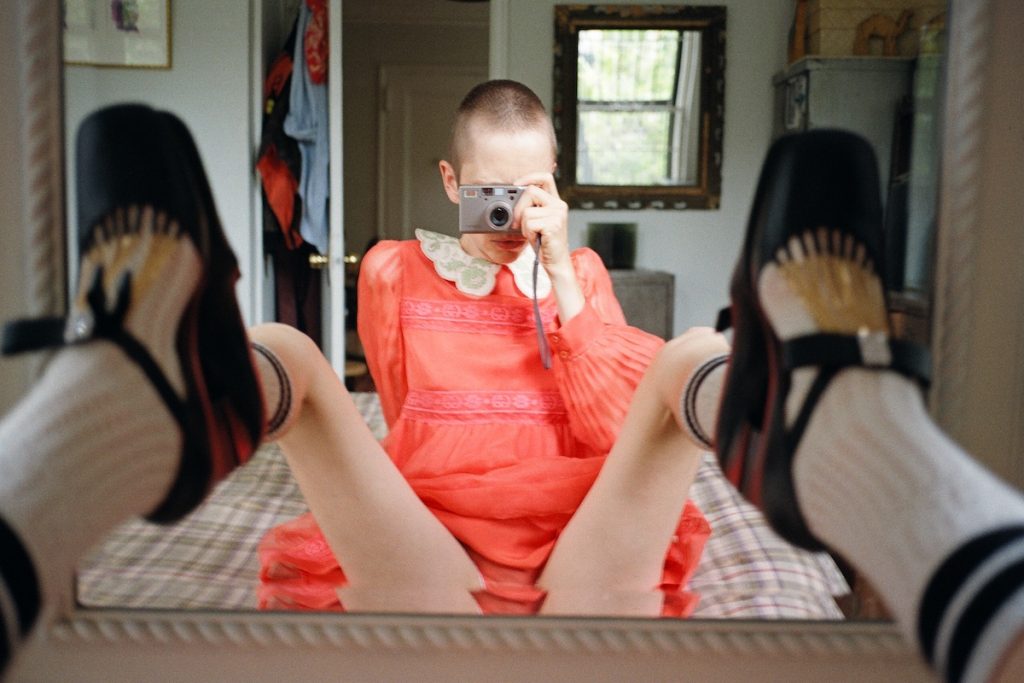 No label, no box – culture of New York, home in the Czech Republic

Shaved head, Yashica T4, displacement: Marie Tomanova and her search to amalgamate the New York City and the town of Mikulov through photographs

The concept of belonging is present in Marie Tomanova’s photography. In her upcoming series titled New York, New York, she compiles portraits of children and teenagers in the East Village neighborhood of New York City. «They know and express who they are. They know what they want to do. They have grand ideas». Growing up on a farm in Mikulov, the South Moravian region of Czech Republic, integration in the community played a key role in Tomanova’s upbringing. In 2005, she was the first of her friends to have bought a cell phone with a camera. She photographed the identity of youth culture in the post-communist era. The anthology comprises naked bodies, a campfire, two people jumping, a street in a fog, a tongue, and Tomanova herself in closed-up portraits. When she left for New York City in 2011, she found herself back to square one: nobody knew her in the Big Apple. It took time before she built her connections and expanded her circle. She embraced the anonymity. Around the city, she discovered places, met people, and experienced a lifestyle far from the traditions of her small town, yet she still saw herself as a tourist. At the beginning of her photography, she explored belonging as a response to being in one place and out of it. Self-portraiture deals with displacement, identity, inclusivity, gender, and sexuality. She crosses the psychology of fitting in on the landscape of America and accepting it without losing her origins. Her nudity in nature pays homage to her upbringing. She recreates the presence and comfort of nature in her life, a space that had been a mark of her childhood. She had grown distant from nature, drawn from the city life she has adopted, and capturing herself without clothes among trees, branches, boulders, and flower fields was her means to survive in the new space. «Being nude is often placed into boxes. Styles that are based on the vision of a society for men and women define the clothes. They restrict insights, suffocate. I experimented with nude and nature to seek escapism from the city and one’s return to nature».

The culture of belonging persists. In her Young American series, Tomanova celebrates her America: individuality is valued and not judged as a lack of homogeneity, it echoes directness, presence, and identity. It is about optimism, youth, and the connection between people. It asserts the future of youth as an antidote to oppression and politics that the United States of America undergo. It is a platform to youth empowerment that shapes gender, society, culture, and ideology. As photographer Ryan McGinley writes in his introduction to the book, «This is a future free of gender binaries and stale old definitions of beauty. In Marie’s world, people can just simply be. I wish all of America’s youth culture looked like Marie’s photos of Downtown, diverse and inclusive». She has shot with a Yashica T4 in landscape format. She stands two feet away from the subjects, in a relationship between two people. Within the boundary, there is intimacy. Chemistry flows. For Tomanova, it adds realness when she captures. «Kate and Odie is an example. The shoot occurred during the beginning of their relationship. There was an intimacy between us three. After two rolls of films, they were naked in the bathtub. They exuded comfortability in their relationship and identity. The pretense was absent. Realness punctures the core of the image. It also comes from the delight I find in meeting people. I do not take pictures for the sake of beauty. I know them and their story».

The profiles in Tomanova’s series are people she has met on the streets. She has no criteria. It is intuitive. She has photographed children in the park in East Village. They reminded her of freedom in childhood. She has taken pictures of people doing yoga. She resonates with the control they practice. She has captured teenagers dressed in styles they desire. They prompted her about staying true to one’s individuality. In 2018, she debuted the 222 portraits at Czech Center New York in New York City. With the amalgamation of images, this series has become politicized. «Being an immigrant posed a challenge. The audience portrayed it as the beacon of America. The series had been picked up by a national television show in Czech Republic. The day after the interview, the gallery received an influx of elders who had driven two or three hours from their houses to see the exhibit. They walked up to me and said the portraits gave them hope about the youth and the absence of division in society». Coming back to Czech after eight years of living in New York, Tomanova ruminated over the differences. «I had no idea how big the United States was. I thought the states were all the same. I knew New York City from Sex and the City. I was naive. When I visited Czech in 2018, I saw the Czech-ness that I might have missed. Their habits remained the same. They lived and thought inside the box. They appeared in contrast to the Young American project of not having to fit into anything. It is about uniqueness in character and sameness in commonality. I went back home, but it was not the same anymore». It Was Once My Universe became the culmination of Tomanova’s displacement: her return to Czech Republic after eight years. In the anthology, she captured a self-portrait on the airplane, vines of dandelions springing on a fence, a photograph of her mother and grandmother, a printer, wigs, ponies in snow, and the panorama of the city covered in snow. «When I left for New York, I had a boyfriend in Czech Republic. I would come back to marry him and have kids with him. When I explored New York, it gave me freedom, time, and space to figure myself and my desires out. The experience links to the displacement when I returned home. What I used to do there did not relate to what I do now».

In her self-portraiture for Lampoon Magazine, she wears a red dress with a white collar. She sits down on her apartment’s floor, faces the mirror, opens her legs, and captures the image. She leaves the apartment, blurs her face, and takes a snapshot of the New York City landscape behind her. At night, she puts on her white top, dons her white pearls and pendant, clothes her neck with a white cloth, masks her face with a mesh cloth, squats in a garden, covers her eyes with purple flowers, and photographs herself. «Identity changes. Having a sure identity means that one is on top of the mountain. They have reached the peak, the only way to go is down. For me, it is an ongoing adventure, an uphill. It is about going somewhere and not being in that place. It is about walking towards it, but not reaching the finish line». Tomanova’s first encounter with gender and identity was in North Carolina in 2011. Her friend identified themselves as they. In the Czech language, the term they for sex is still in question. In her photography and art, Tomanova infuses inclusion, no label, and no box. Marie Tomanova had shaved her head two hours before picking up her mother at John F. Kennedy International Airport in New York City. When she used to paint, she would sketch herself bald, even though she had long hair. She treated the style as liberation. In her early 20s, she shaved her head. Her mother disliked it and worried about her. Before moving to New York City from Czech Republic, Tomanova grew her hair long. After living in the city for eight years, she shaved it again on her mother’s arrival. Since then, she has kept her hair almost bald. It has become her philosophy in art and photography. «I resonate well with shaving my head. It is what fits me the most, and not what the society foresees I do».