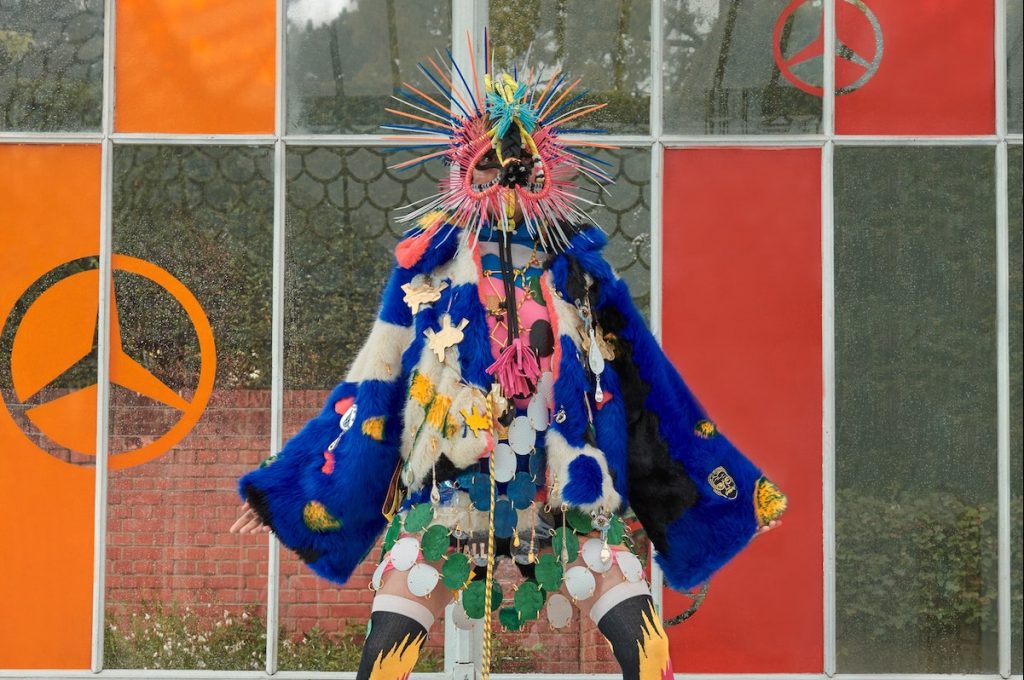 Inner demons conquered by the winner of the Hyères Festival 35th

Tom Van der Borght wields the influences of Bjork, his tenure as a social worker: he journeyed through the social issues and communities that marry his refuge

Tom Van der Borght was not permitted to turn on the television before he went to school, he broke the rules and reached for the remote. On the screen of his family’s television, he watched Bjork flail her hands, jump in jubilation, gravitate her body up close and far from the camera, and dance on top of a delivery truck in cinematography doused with tones of sepia. The Big Time Sensuality video commanded Tom’s attention and challenged him to turn his eye away. He failed. He kept watching. He absorbed every minute. He had found his culture. «Bjork possesses this ability to reinvent herself to find a new version of her persona. She doesn’t put herself in a single box, but slithers out of it and continues to do so, which reverberates my approach to fashion and art. I reinvent what I know and refashion who I am into what I produce» says Van der Borght. His artistry dangles over a maelstrom of textile, graphics, video, installation, animation, and scenography influences. Fusing each component into his fabrics, he adopts tribal designs which he showcased during the 35th edition of the Hyères International Fashion and Photography Festival.

Seven Ways to be TVDB, is on the edge of bricolage, haute couture, avant-garde fashion, and performance. «I exude the mood of a tribe which I see as a symbol of collectivity. I feel the demand to create a tribe where everyone belongs» says. Van der Borght drew his collection from research based on reading essays off books, turning words into an animation, transforming the animation into an exhibition of clips and art pieces showcasing his experimentation. «My work intertwines tough times in life and having the opportunity to discuss them with another soul. The experience made me think about how we deal with difficult situations on our own. Close friends and family have started to open up about their struggles and difficulties. In our society, we witness exclusion and nurse doubts, but find commonalities in our dispositions». Illustrating his anthology «People think once they leave their safe ground, they will turn into a butterfly free to roam the space, but it doesn’t always end up in such a way. We will have to be protected only by half of the cocoon’s shell while the rest is up to us to conquer without a shield». He embellishes his collection with masks and headpieces out of straws. «In the pursuit of collectivity, I erased the glory of identification that comes from the face. By blurring its features, anybody could be anyone. Gender almost becomes irrelevant».

He bore the label of being different within his community, but he failed to see his oddity from his stance. He taught adults who hadn’t been fortunate enough to access education how to read and write. He transitioned to working with young adults who came from households that treated violence, abuse, and difficulties as a norm to rehabilitate and recollect themselves. He glided into collaborating with an organization that puts into practice policies of safeguarding the lives of young adults. Throughout his ventures, he exposed himself to diversity and acknowledged the array of ethnicities that have opened his mind. After completing his MA in Fashion Design at Stedelijke Academie Voor Schone Kunsten of Sint-Niklaas in 2018, he stepped back into the realm of fashion and art with the desire to incorporate his imagery, advocacy over social affairs, and message of inclusivity in his ethos. «I am conscious of what I work on and convinced that all the information I aspire to convey and share will mirror in the fabrics and approach I come up with. At the same time, I welcome the interpretation of the audience, and their words, on how they perceive what they see».

Van der Borght works on his own. «Less is more and the practice of sustainability comes in. I want to make clothes one will own for a long time; I focus on including materials such as the leather made of fish skin, fake fur as an alternative to real animals, and corn-based fibers from the companies I collaborate with. I also ask embroiderers who have leftovers of fabrics if they can give them to me. Disposable plastics are present in my collection, and it is an interesting notion since the use of plastic is controversial. I find it difficult to absorb when people blame the materials as we shoulder the responsibility of how to make the most out of the plastic rather than disposing of it after the first use». In his book, he translates the amalgamation of his materials into a luxury that demonstrates comfort, color, and compassion.

Winning the 35th edition of the Hyères International Festival of Fashion and Photography, Van der Borght drafts his fashion and artistic endeavors for the future. «In Amsterdam, I’m developing a collection with artists of different backgrounds and a mini-collection here in Belgium with another artist». He has lifted his pencil and sketchbook to jumpstart designing what he will showcase in the next edition of Hyères. When discovered a hereditary neuropathic muscle disorder at the age of twenty-six, he chose to deviate from weaponizing such a narrative. He works towards repurposing what he foresees and reforming his approach in upcoming projects.

Tom Van Der Borght
Pursued his MA in Fashion Design at Stedelijke Academie Voor Schone Kunsten (SASK) of Sint-Niklaas in 2018
He won the 35th International Festival of Fashion, Photography and Fashion Accessories in Hyères in 2020