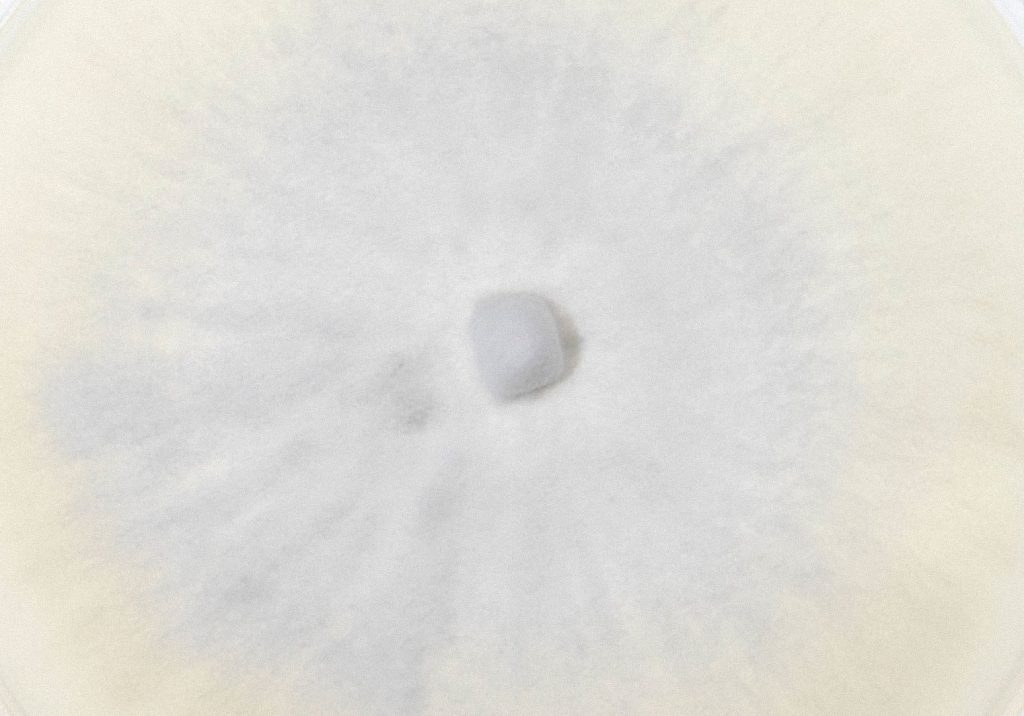 A web instead of a weave – an introduction to mycelium, textile of the future

The network created from mushroom roots, called mycelium, is a versatile material which is made up of fine strands which spread out in all directions and form a web

The network created from mushroom roots, called mycelium, is a versatile material which is made up of fine strands which spread out in all directions and form a web. The resulting material can be used to create an alternative leather material for footwear, clothing, and accessories. It can also be processed to create composite fabrics for a variety of insulation and other materials for technical textile applications.

All fungi share mycelium as a trait. They use the network to search through the soil, gather nutrients and link up to each other. The network is made up of fine strands called hyphae which spread out in all directions in the soil, looking for food and creating a web. Hyphae are tiny filament-like hairs.

According to Amanda Morglund, founder of Mycelium Made in Melbourne, Australia, mycelium forms a cohesive material because of its web-like structure. It grows to the extent of the food source it has, which means that the material can easily be moulded to the shape required, because it takes on the shape of the vessel in which it is grown. There are many types of mushrooms, and it is estimated that only around 7% of fungi have yet been identified – leaving plenty of scope for further development and innovation. Oyster mushrooms grow rapidly, they take to any food source, and they don’t easily get contaminated, thus producing a consistent and strong mycelium.

The development of mycelium as a composite material began when farmers, who were harvesting mushrooms, were left with blocks of mycelium plus the materials, such as straw, on which the mushrooms were grown. The result was a composite block which was dense and absorbent, making it a good insulation material which was later to be incorporated into industrial design, architectural installations, and sustainable alternatives for the packaging industry. «Mycelium can be nourished by waste materials, such as agricultural offcuts, and anything cellulose-based, such as paper, packing and textile offcuts. It grows through the layers of offcuts and bonds together with them, which makes use of these offcuts and creates a composite material».

Leather-like mycelium materials are made differently. These are made from the fruit itself – the mushroom –  and not blended with a source material. A range of material types can be created from mycelium by controlling the environmental conditions, the amount of oxygen and water and airflow. Hard, solid materials – like leather – can be produced for use in furniture, and softer materials – like suede – can be produced for use in clothing.

In Mycelium Made, Amanda Morglund makes use of the following processes: Mycotailoring – to bond recycled textile fibres into garment shaping; and Mycocycling – to reuse or break down waste materials before composting. The company uses mushroom leathers made from Reishi and Amadou mushrooms. Reishi produces a leather-like skin from its mycelium, and Amadou mushrooms are imported from artisans in Romania. They laser cut and mould well with steam, resulting in a suede like effect. No chemicals are used in the production of mycelium, although the materials can be dyed. In the case of Mycelium Made, products contain only natural dyes to avoid harmful dye runoff. The organism has to be rendered inert so that it doesn’t grow further, which can be done by air curing – requiring the application of heat. The mycelium leather responds well to washing but, because it is antimicrobial, it does not need to be washed as much as conventional textiles.

Every Mycelium Made product includes a pot of mycelium spores so that people can recycle and compost the packaging afterwards. Morglund encourages composting at the end-of-life for these materials. «They’re for the garden and the soil. Chopping them up and shredding them and getting them into compost is the best way to deal with these things at their end of life. We want to prevent as many of our resources going to landfill as possible because landfill is not an environment where the material or energy is going to be broken down – even though the mycelium material is biodegradable. I encourage people to grow a crop of mushrooms on the clothes they wish to discard, and then pop them in their garden instead of putting them in landfill where they’ll just stay for many years, even if they are made from natural fibres».

She adds: «There’s a test I’m doing at the moment, where I’m training one of my oyster mushroom species to be able to consume smoked cigarette butts, because a lot of the toxic materials in cigarette butts are water soluble, which means that they leach into our water systems and are ecologically damaging. So, it’s a better option to grow some fungi on them and break down a significant portion of the pollutants before they get thrown out».

And, she explains: «I’ve got a bucket in my house, which any packaging goes into – or damaged textiles. There are some mushroom spores in the bottom of the bucket and when it fills up with mycelium growing over the materials or packaging, I mulch it into my garden compost».

Morglund believes that it could be a viable solution to the fashion’s waste problem: «Having the entire fashion supply chain working together in partnership with the agricultural sector as well as the industrial sector and consumers, to have a more circular system – where packaging and waste from the production of garments is recycled into the system. Fungi could be used to overhaul our waste management system and make it cleaner, and less wasteful. Remediation is also important, so repairing some of the ecological damage that we’ve done with fungi, and rewilding some areas, is going to be important for stabilising our climate and protecting biodiversity».

MYCOmmunity is another of Morglund ’s ventures, which provides laboratory space to get every day people involved in mycology – it is a sharing community. Mycology has been regarded as a niche field and has been under-resourced, compared with other bio-sciences, but it is essential to ecosystems and understanding challenges such as climate change

«We need to understand how fungi species work because it is a very important fundamental layer. We are inviting people in to take part in community science. Wild Fungi DNA is a research project where we are asking people to document the fungi they come across. We need to collaboratively get research programmes off the ground and get people to learn about fungi in workshops, and have set up a spore library to trade cultures. Community lab space enables people to do their own research. Anyone can cultivate mycelium. I am running workshops on cultivating household waste, and inviting people to think of household items such as unwanted fabrics which could be used to cultivate mycelium. Then I will do a micromaterials course to show people how to work with these materials».

Meanwhile, MycoTEX, was founded in the Netherlands by Aniela Hoitink and claims to offer an all in one solution for luxury, sustainable, high quality clothing. The company has developed technology which produces textiles from mycelium which are combined with 3D technology to create seamless garments which ultimately fit the body perfectly.

Hoitink explained: «People want to enjoy fashion trends but we don’t want to add to the waste, so we like to have clothes made from natural materials, preferably with a clear and transparent production method, and  made with as few resources as possible. MycoTEX meets the demands of the consumers and helps brands to make clothes using a new production technique». The company is initially focusing on accessories, and then plans to move on to apparel and footwear – and, in future, anything which is traditionally made from leather.

Mycelium is the main ingredient used by the company and is grown in sterile conditions in a laboratory. It takes between 1-4 weeks to grow the material, depending on the type of mushroom used. From a sustainability perspective, it is important to note that the volume of water used in production of mycelium is about half of that used to grow cotton. Furthermore, in the future, the company hopes to use recycled water from food canning plants, in the production of MycoTEX.

The company is determined to reduce the industry’s impact on the environment, by shortening the supply chain and reducing its international transportation footprint. Hoitink believes that this will have the single biggest impact on the environment. Eliminating transport will reduce carbon emissions – in contrast with conventionally material which may be made in Egypt, shipped to China, and onwards to garment factories elsewhere in Asia, before arriving in retail stores in Europe and North America.

There are no animal products in MycoTEX, which has the added environmental benefit that no farmland is needed -in contrast with cotton. This leaves land free for communities to use for food production. The company’s aim is to produce goods on demand, so that absolutely no waste is guaranteed. And, in contrast with the huge volume of clothing which currently ends its life in landfill or incineration, garments made from MycoTEX are home compostable.

The material can be grown in any country, as long as the company has the right sterile conditions. There are no hazardous chemicals used in the process, and no land needed to grow the materials. It would be ideal for companies who have been forced to relocate their manufacturing facilities overseas, and who wish to introduce production of a more innovative material closer to home. Products made from mycelium can be dyed using biodegradable dyes, and can be disposed of in the customer’s home composting bin, where they will break down completely within 6 months. Hoitink commented that this inspiration comes from nature: «The trees have leaves which fall off every year and end up being a source of nutrients for the next year.»

MycoTEX is keen to find partners who will license the technology and scale up the production of MycoTEX material. «We are not producing the material ourselves. MycoTEX is about development: creating new products, and moving from fashion into other industries. We are looking for collaborations with companies who want partnerships to scale up material production, and who are interested in 3D production. Those are the partners who will make the materials. We will train staff in those companies and help them to set it all up.

MycoTEX will be launching its new and improved materials in January 2021.