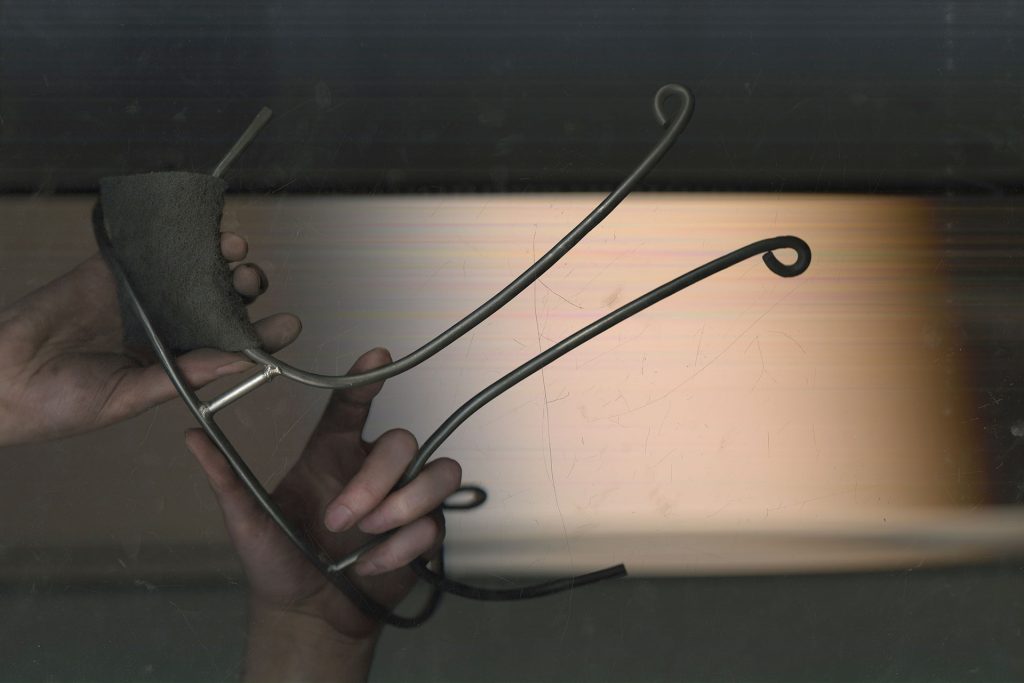 «Sustainability is only successful if it’s sexy» says Elena Velez, 25, on what it takes to make both visually and ethically attractive garments today. Responsible design is «non-negotiable at this point. There is no future outside of the context of sustainability. You need to find a way to appropriate it». For the recent graduate, who left New York’s Parsons School of Design in 2018 with BFA Fashion, and London’s Central Saint Martins with a Diploma in June, this is achieved through repurposing used materials. Not just textiles. Anything salvaged with potential to be wearable, and imbued with a story, is an option; from sail boat beams to discarded parachutes. Velez was born in Milwaukee, in the Midwest state of Wisconsin, a city in Rust Belt America with roots of industrial production. They stretch back to the arrival of highly skilled German immigrants in the mid-nineteenth century, and boomed during World War Two as the area’s metalworkers produced for the military effort.

It was the same war that inspired Velez’s Parsons graduate collection, _And Carry On. Milwaukee’s role in the conflict is nodded to by embedding metal structures in the final garments, which come in a characteristically earthy palette of muted grey, white and beige. A military tailored, khaki dress is slashed open at one end, revealing a bodice of reclaimed steel rods. In another, a corset of wartime canvas has its traditional boning replaced with aggressive sticks of metal running diagonally through, extending out over the breast. The collision of sharp, architectural structures and softer fabrics, like nylon parachutes reset as mini-skirts and gowns, is quintessential of Velez’s style. «I found there an interrelation between rigidity and flow. To have a masculine, structural, concrete element, and then something sensuous to go with it».

It was the beginning of a now three year-long collaboration with Gallas Metalworks, a Milwaukee company Velez travelled home to enlist for the production of the metal structures. «I work small local businesses who are doing some sort of artisanal or hand produced craft or trade» Velez says, «using your platform to highlight other artists and their products is important to me».

Derek Everson, 33, is the project manager Velez was paired with at the custom metalwork business. Having studied Metalsmith and Jewellery making at the University of Wisconsin–Milwaukee, Everson had joined Gallas at 29, a company that before 2018 had never made wearable items. Products like handrails, garden sculptures, and even some spoons, are more common days at work. The metalsmith remembers Velez entering the shop for the first time, armed with sketches and wire models of the planned graduate collection. «I wasn’t sure how involved she wanted to be», Everson says, «if I was just going to get a design and make it, or if she wanted to learn some of these skills and do it herself». Early on in the production, though, it was clear the pair worked best together.

The designs were drawn up in a month, before the search for materials commenced. «I went down to my Mom’s shipyard one day and started to pick and accumulate. It started with photographing, and then I pulled the pieces I wanted to work with from there». Back in the studio, and Velez had a pile of goods to start experimenting with. «I took rope, I took the actual sails of ships, we repurposed some of the hardware out of the ship sails. Then I salvaged the scrap metal and steel beams from a couple of other boats that were laying around».

With the discarded metal, and the help of Everson, the forging of the steel structures began. In Vessel this includes a chest piece with a horn-shaped front, plunging down the upper body where a ship canvas gown is fastened. Another is a metal skeleton of a bra secured by thick, sailing rope. «We take a dress form, if one is available» says Everson, explaining the steps taken in the Gallas workshop, «and do some rough measurements. Then we take the material, this time it was quarter inch stainless steel rods, and cut that down to the rough size. If it is a gentle bend we can usually do it just by hand or with a hammer on an anvil. If it’s tighter and more complex then we put it in the gas forge and heat it up so it’s really malleable. We use that, with the anvil and hammers, to shape, form, and tweak it until we get close. Once we get a few of those main structures, or the outline of the piece, then I will TIG weld it together», a wielding technique called Tungsten Inert Gas, which uses an electrode system allowing for precise joints to be made, which are later sanded down.

The metal’s surface can be treated to give certain effects by rubbing either a blackening or artificially rusting patina over it. A wax or clear coat can then be used to protect the pieces, but for Vessel «Elena just wanted to leave them so they would change over time». Experimentation with other forms of metal were not so successful, though, specifically trying to manipulate steel cables from one boat. «We were trying to incorporate them, but every time I cut it or tried to weld it together the cabling would just fall apart or get frayed. We might address it again later», says Everson.

With the completed metalwork back in the studio, Velez drew the pattern pieces needed to fill the gaps and make the garments, before spreading her found textiles and starting to cut. «The way I laid the patterns was of a bespoke approach» Velez says. One corset bodice is made from panels of a boat cover in varying shades of brown from sun fading, laced together with thin ropes. «All of the line is repurposed, the hardware is referential to the original», Velez says of the small metal holes punctuating the strips of fabric. «Each piece could probably not be replicated in quite the same way again».

Each segment of the bodice has a fraying hem. This is intentional, but working on the trim is dependent on the material, Velez says. «Some [sails] are silky and can fray, so you have to be careful with how you secure and finish them. A lot have a Vinyl, plastic, quality so they don’t as easily. You have to use a leather needle to process areas with a lot of extra bulk in the folding as well, but I felt comfortable working with them». No fabric was treated before, just cleaned and used raw.

In all, the production of the collection took around six months. The first few spent on planning and flying back to Milwaukee to discuss, develop and complete the metalwork, before the garment making phase, which Velez completed alone. «Final production usually takes about three to four months, then towards the end I start planning how it is going to be shown». Vessel was presented as a photographic lookbook, but the following Homecoming collection, for Spring Summer 2020, was a fully produced show presented back in Milwaukee.

Taking the runway back home allowed the success of the brand to be shared. «The ability to be in Milwaukee and offer paid and professional opportunities to hair and makeup artists, videographers, models and stylists was what Homecoming was. A case study in whether something like that would be possible». From a local perspective, Everson agrees. The same is said for Velez’s local, connection-based, business model as a whole. « I know there’s a lot of metalworkers out there, and I probably wouldn’t have had the chance if she didn’t want to come back and hire people in Milwaukee». Together, Everson estimates, the pair have completed around twenty individual pieces in the course of three years.