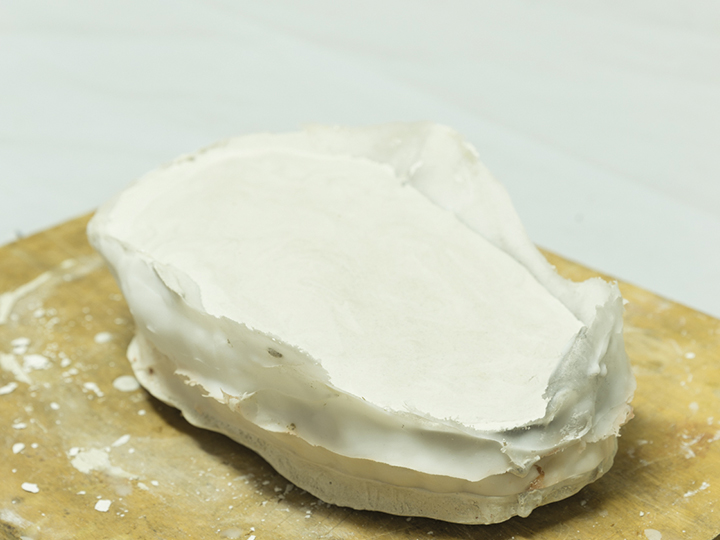 Sienna brown, rabbit skin glue, gold leaf for the gold background, cloaks of saints and of the Madonna – the tools, techniques, and love of art in the works of Daniele Rossi

Internal energy of the masters

Daniele Rossi – master restorer – began his career at 27 years old when he was entrusted with the restoration of the Baptistery of St. John in Siena, beneath the Duomo’s last spans. He looks back on his solitary debut, the encounter with the vaults and late Gothic triptych of Bologna-born Michele di Matteo; the apse which Vecchietta (Lorenzo di Pietro) built starting in 1450 adjacent to the lunettes by Pietro degli Orioli – The Washing of Feet, 1489 – and Benvenuto di Giovanni, who, in 1460, painted the Miracles of Saint Anthony of Padua.

He lives between Florence and San Gimignano – the city in which he was born – with lengthy Sienese digressions in lost and mystical places like the Abbey of Monte Oliveto Maggiore, an abstract landscape like that in Angelico’s Tebaide. He has worked on various occasions in the abbey’s cloister, on the frescoes of Luca Signorelli and Sodoma. Restoring requires an understanding of the life of art and of the internal energy of the masters, without mystifying expressive experience and existence.

“Patience is the foundation of this job,” he says, “as is a deep involvement with the work, even if it is just an old family portrait of no value. The eye must be vigilant, quick, and trained.” In his book Lettere ai Maestri, Storie di oro e tinte forti [Letters to Masters, Stories of Gold and Strong Colors], Rossi addresses ancient friends, from Donatello to Ghirlandaio (an artist he became acquainted with in his early youth, thanks to the frescoes of the Santa Fina Chapel, 1478, in the Collegiate Church of San Gimignano) and from Lorenzetti to Beato Angelico and Rubens.

In 1979 Rossi became a member of the C.B.C. cooperative, made up of former students of the Istituto Centrale del Restauro, where the Roman school – shaped by Cesare Brandi, founder of the Institute itself, and run by people like Paolo and Laura Mora and Michele Coraro – saw the on-site participation of Bruno Zanardi, his first teacher. He went on to study at the school of the Opificio delle Pietre Dure in Florence, where he earned his degree as a restorer. He began working for public and private clients, on pieces ranging from paintings on canvas and wood to frescoes, from stuccowork to terracotta, as well as wooden and stone objects. He continued to feel like an apprentice, like those found in Renaissance workshops.

He was responsible for the restoration of the twelve panels of the coronation and predella of Duccio di Buoninsegna’s Maestà at the Museo dell’Opera del Duomo in Siena and the Visitazione di Carmignano by Pontormo, that which in 1995 Bill Viola. Rossi encountered Pontormo, a constant throughout his career, once again in the Capponi Chapel of the Chiesa di Santa Felicità in Florence, where the Evengelist rounds, the frescoes, and psychedelic altarpiece of the Deposition, the masterpiece by Jacopo Carucci (as the Mannerist Pontorno was also known) are preserved.

“Leaning against the wall in my studio, in 2017, this altar frame built on boards of poplar with bone glue, and wooden pegs, could always cheer me up,” says Daniele. “The spectrum of colors enters you like an opposing force. The red of the final brushstroke, the broken features, and even Jacopo’s fingerprint on the green beret, all confirmed my undying love. I’ve also worked with 19thcentury pieces,” he specifies, “with John Singer Sargent and Fattori. After my introduction to Goya I became acquainted with Lucio Fontana through a violent razor cut. I opened it and I fell inside.”

Currently Daniele Rossi is working on the restoration of the choir of Sant’Agostino in San Gimignano, after having raised the alarm on the condition of Benozzo Gozzoli’s frescoes, neglected since 1999. In that year he had also recently restored, on the high altar of the same church, the Coronation of the Virgin, by Piero del Pollaiolo: 15th century oil on wood signed by the Florentine painter, “immobilized by a dark mantle that they poured over him like a glaze.” As a child this Augustinian church was an initiation for him when, as an altar boy, he was given special jobs like shaking the clochettes during the elevation of the host or pulling the ropes of the bells, which were still rung in this manner.

In 1966, in San Gimignano, restoration of the large cycles of frescoes in the collegiate church began, and Daniele, still a child, looking up from under the scaffolding imagined the restorers to be painters with brushes and palettes. In his family, for a time, the leading figure was his grandfather, a coalman and a solitary man who spent most of his time in the woods building charcoal kilns. Meanwhile, his aunt hand-embroidered tablecloths and sheets for dowries. One Christmas, at his grandma Ottorina’s place, who had been a nurse, he discovered, rummaging around in the attic, a collection of epistles. “They were letters that I read, sometimes without even understanding what they meant. I always looked closely at the greetings and the signatures,” writes Daniele in his book.

The skin of respect

“Restoration usually begins with understanding the piece, though once work gets underway we are the ones who provide historians with clues and additional points of research, after a reinterpretation of the painting or sculpture in light of new facts. The material sleeps beneath the original layers or those added by men. From the onions of the sacristans, rubbed on the smoky faces of the Madonnas, scaly lamina often emerges, while improper retouching undermines the truth of history. Time is perhaps that which causes the least serious damage. You work until you find the so-called ‘skin of respect’, beyond which it is always better not to go, in order to appreciate a painting’s secret voice.”

“In the restoration of Pontorno in Santa Felicita,” he adds, “I discovered that the drawing coincides with the touch of the paintbrush, alternating between choppy and liquefied. The feet of those sheathed dancing figures, tattooed in absurd colors, rested on rocky terrain while a strange white cloud hovered in the deep blue sky. When they came to pick it up and bring it back to the church in the small piazza behind Ponte Vecchio, where it has been since 1528 – it was like parting with a piece of myself.” Among the letters in his book, he pretends to have found by chance a manuscript by one of Giotto’s students, Taddeo Gaddi, within a large old piece of furniture in the gallery of Santa Felicita beneath the Vasariano corridor. A list which reveals all that is required to create a polyptych, dating back to the mid-14th century. It mentions solid poplar boards without knots, glue made from goat milk casein, Bologna chalk and iron nails, wooden pegs and spruce crossbeams, charcoal, and lambskin stretched thin.

The colors were minium and cinnabar, red ocher for the carpet, red Armenian bole, and Sienna brown. Rabbit skin glue, and gold leaf for the gold background. Ultramarine lapis lazuli and white lead for the cloak of San Filippo; azurite and ‘slightly less’ lapis lazuli for that of the Madonna. The Child is dressed in verdigris, sandarac, and silver leaf; the recommended brushes are made with hair of young vair. It reads like a recipe for one of Merlin’s magic potions.

Certain natural pigments and minerals left over from the ancient masters are still used today however synthetic materials are more common because they are more stable. The gaps, which are the focus of endless theoretical debates, are reintegrated with the vertical ‘hatching’ of Cesare Brandi, or with the ‘chromatic selection’ defined in the 1970s by Umberto Baldini and Ornella Casazza. His favorite painting, confesses Rossi, is always the last one he has worked on.

The unfortunate events that now, as in the past, devastate works of art, are for him an ongoing challenge. Young restorers, in the near future, may have less time to think and be in too much of a hurry to act. His current desire is to restore a painting by Jackson Pollock, abstract expressionist American painter and a prominent figure in the action-painting movement, who died in 1956 in his early 40s. “I’d like to investigate his restless and multi-material abstract art, to be unearthed in a particle of dust. A shattered image that finally must not be put back together.”