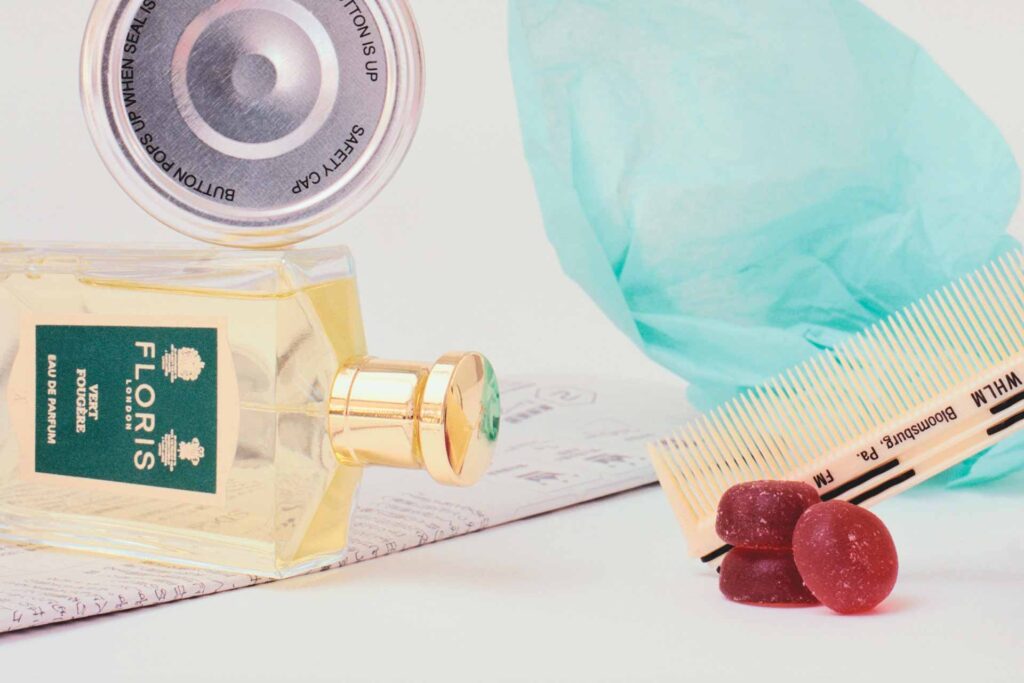 In 1820, Floris Jermyn Street received the first Royal Warrant. The right to be named as an official supplier to the British Royal family, and use the Royal coat of arms on their products. The first warrant was as a producer of combs for King George IV. It would be the first of multiple Royal warrants the brand would receive over the course of many years, warrants which may still be seen in Floris Jermyn Street in London.

His Royal Highness the Prince of Wales

Today, the firm holds two Royal warrants: as producer of toiletries for His Royal Highness the Prince of Wales; and as perfumer to Her Majesty Queen Elizabeth II – the only fragrance house in the world to boast this title. The many tributes the firm has paid to the crown have been lost in the mists of time. In 1840, Floris created Bouquet de la Reine – a fresh and fruity perfume with top notes of bergamot, blackberry, peach, and violet and warm, woody base notes – as a gift to Queen Victoria on the occasion of her marriage to Prince Albert.

Yorgos Lanthimos’ film The Favourite manages to convey in images what London must have smelled like in the Eighteenth century. Illness, putrefaction, urine, human and animal excrement, garbage, rats, filth, nearly nonexistent hygiene, sweat and dirt trapped under poorly-laundered clothing and wigs. To combat this stench, Floris created Limes, a fresh and citrusy scent. With lemon top notes combining with lime blossom, neroli, lily of the valley, and petitgrain. Limesis still sold today.

The history of Floris

The history of Floris Jermyn Street began in 1730. When Juan Famenias Floris left his native island of Minorca to seek his fortune. He disembarked in the London of King George II. Shortly after his arrival, he rented a shop at 89 Jermyn Street, in the St. James district. Here, joined by his wife Elizabeth, he went into business as a barber.

Jermyn Street was located near the Royal court of St. James, and home to private clubs and residences of wealthy gentlemen. Floris not only shaved the local élites, he also offered them and their wives handmade accessories. Such as combs, shaving brushes, hairpins, toothbrushes, and razor strops.

In the back of the shop, he began to produce fragrances. First, colognes to be used as after-shave, and then actual perfumes, which were reserved for the best clients. The formulas were kept secret. Raw materials arrived from the Mediterranean, Floris’s birthplace, for which he felt great nostalgia. Floris perfumes were worn with masculine pride by the men who went in to the shop for a morning shave. And this helped eau de toilette lose its feminine connotation. In 1870, Mary Ann Floris married R. D. Bodenham. The couple had sixteen children, and in 1878, they took over the family business from Mary Ann’s brother, Joseph.

From that time onward, there has always been a Bodenham in charge of Floris. Today, the director is Edward Bodenham, who is also the head Nose. The perfumes combine scents of home with the those of father and grandfather. One scent in particular, Elite, was created in 1979, but based on a lotion from 1800. Apart from the jewels of the crown, the Kensington gardens, and the secondhand shops of the East End, London is defined by Floris. Anyone with an English father or mother recognizes the bottle immediately.

Important pieces of history are preserved at the boutique on Jermyn Street: There is a letter from 1818 from Mary Shelley, who lived abroad at the time, in which she sends an order for a toothbrush and two combs. In another letter from 1863, from Florence Nightingale – the “Lady with the Lamp” and the godmother of modern nursing – thanks James Floris for the sweet bouquet he sent upon her return from the Crimean War. A receipt from 1930 bears the name Winston Churchill, and records the purchase of various fragrances, including Special No. 127 and Stephanotis, both still sold today as integral parts of the collection Floris Classic.

Another receipt, dated 1959, has the name Marilyn Monroe Miller at the top, and certifies delivery of a bottle of Rose Geranium Oil to the Beverly Hills Hotel in California. (The actress used it for her baths.) A Floris collection called The fragrance journals launched a scent in May 2018 that is dedicated to 1927.

This perfume brings together the creativity of the Jazz Age, when the upper middle class was discovering transgression, and where a new culture formed based on art and the need for modernity. It is the scent of Cecil Beaton and Noel Coward, both clients of Floris. One of its head notes is an aldehyde, a possible reference to Chanel No. 5, created around that time period, and one of the first perfumes to contain a synthetic essence.

The heart notes are composed of mimosa, violet, and narcissus, while its base notes contain another homage to Mademoiselle: vanilla and musk, fragrances used by courtesans which were brought into drawing rooms for the first time by Chanel. A small bottle of Floris N.89 accompanied Sir Ranulph Fiennes on his expedition to the North Pole. N.89 is also James Bond’s cologne, and the woman Al Pacino imagines in The Scent of a Woman wears an unidentified fragrance by Floris.

Still a family business today, Floris maintains its independence and need not to follow the trends of the fashion world or the strictures of marketing, but it does not ignore the changing times. New raw materials and new methods of extraction are required, and new needs must be responded to. Today’s collection includes perfumes with a vintage air, such as Edwardian Bouquet, with dusty and musky base notes, and modern perfumes such as the best seller Soullé Ambar, with floral notes.

Sixties London was colorful. People loved openly and held hands. It was the era of Mary Quant and Biba. There were bohemian neighborhoods spilling over with music and art. London of the Beatles and the Rolling Stones, bars and rock clubs. It smelled of herbs and spices and the flowers that young people wore in their hair. Floris writes a love letter to London, south of Carnaby Street, Soho, Summer of 1962, bottling the fragrance of the Sixties. 1962 has top notes of green mandarin, mint, and clove, heart notes of cypress, jasmine, and basil, and a base of cedarwood, musk, and amber. It is dedicated to an adaptable city that is capable of change, and to its social fabric and its people.

In the shop in Jermyn Street, among the letters, receipts, prizes, and old family photos, is also found the leatherbound book in which, three hundred years ago, Juan Famenias Floris wrote by hand the formula for his very first perfume. Every fragrance created for clients by Floris and his successors is transcribed in that same book – even today.